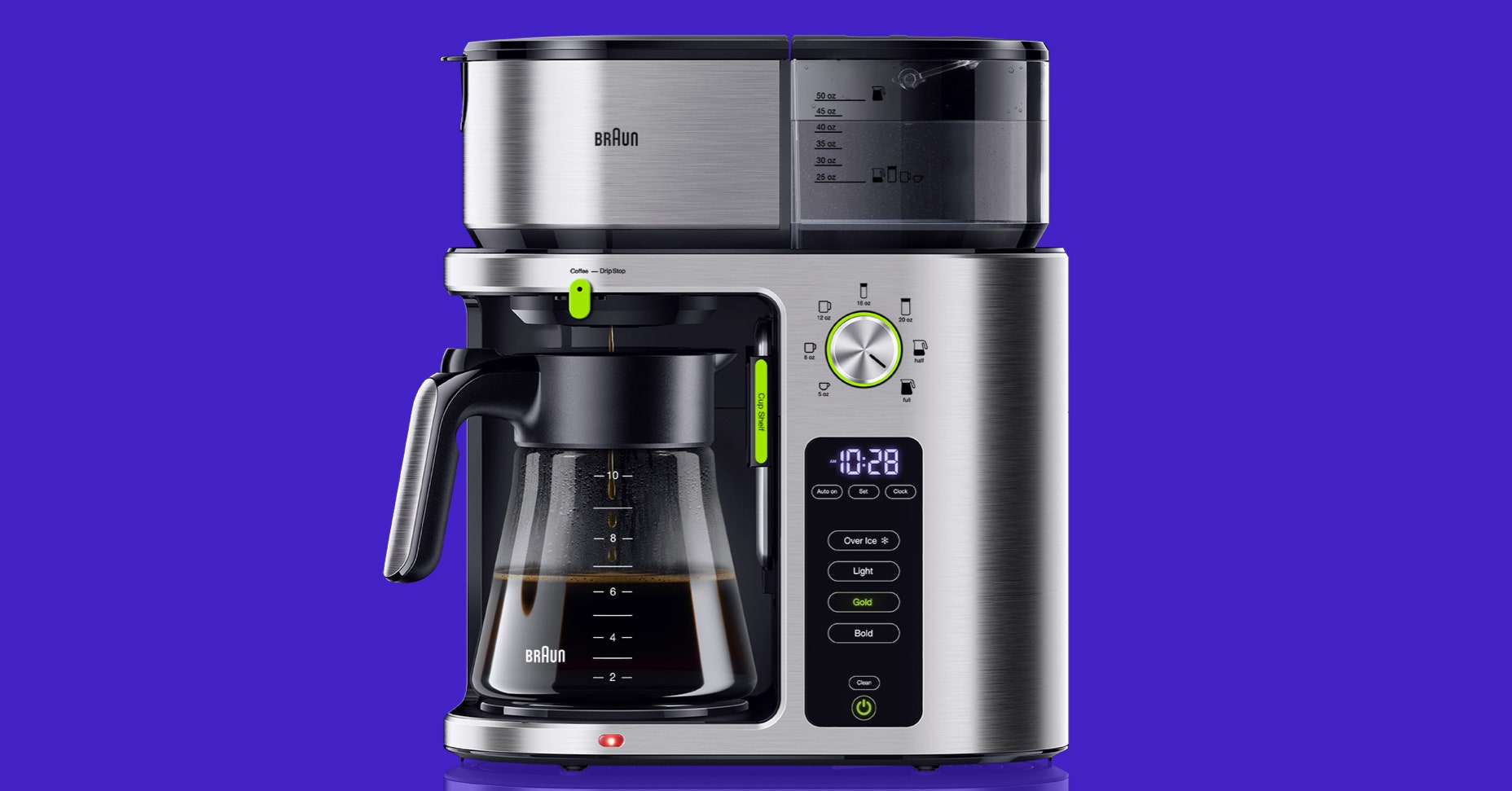 I recently stayed in a cheap hotel in San Diego, using room 417 as an office while I was in town. After a few days, I happened to look into the trash can next to the desk and saw almost nothing in there but a couple handfuls’ worth of spent Keurig pods that would soon be heading straight for the dump. There was a lot of convenience in that machine’s push-button coffee, but thinking of how much waste this creates all over the world stuck in my craw.

Thing is, while regular drip coffee machines can brew a full pot easily, they struggle mightily when you try to make a single cup. For that, Keurig-style machines boast an undeniably convenient setup. Fill one with water, insert the pod full of coffee grounds, put your mug underneath, and press the brew button. Circle back on your way out the door. There’s almost nothing to clean.

Still, can’t we do better? There are bazillions of those little Keurig capsules clogging our landfills in the name of convenience. While Keurig is committed to having their K-Cups in the United States be recyclable by 2020, I’m not sure how well that’s going to work out. Are all the cheap hotels going to start recycling programs? How many people are going to be committed enough to bother? Plus, where I live in Seattle, you can’t recycle any plastics smaller than three inches across, and a K-Cup is an inch shy of that. What then? When I asked Keurig PR about that last point, they got back to me, but they never answered the question. (Nespresso, I see you over there, hand raised like Hermione Granger in Professor McGonagall’s class, but you’re not much better.)

Yet it’s difficult to find a reasonable, quick, and easy alternative for a single cup. French press, Aeropress, pour-over drippers, and even the Moka pot come to mind, but those require more attention than a standard drip brewer. Alternatively, if you want a pot’s worth of coffee from a single-serve machine, you’re out of luck.

Since an all-in-one full-pot and single-shot coffee maker is elusive as a unicorn, and having both a regular coffee machine and a Keurig on the counter feels excessive, I was very happy to learn of the Braun MultiServe. It’s a traditional-style drip coffee maker that does everything from making a nice, large pot to a single cup. You might be thinking, Hey! I can trick my coffee maker into doing a single cup’s worth! Well, you can, but you’ll do a lot better with the Braun.

Much of the MultiServe’s setup is familiar. There’s a glass carafe, a water reservoir, a clock, and the filter basket where you can use a paper filter or the included metal mesh filter. But here’s where you start noticing differences. Fill that reservoir up to the top, even if you only want a mug’s worth, then add the grounds and set the dial on the front to match the size of the vessel you want to brew into. There are seven options for that, from a five-ounce cup to a full pot, meaning you’re also covered for your Contigo or favorite diner mug. The dial settings allow you to brew just the amount you want, even if you have more than that amount in the tank, a clever feat. Plus, there’s an inexplicably endearing little dock called the “cup shelf” that flips down to set a mug on when you brew into it.

You may also be excited to hear about the drip-stop lever, which allows you to sneak a cup mid brew without making a mess, which is both classy and practical. There’s also a version that dispenses hot water for tea and hot chocolate drinkers.

I started brewing and found a lot to like. First, for general coffee-making, the Braun is a Specialty Coffee Association (SCA) Certified Home Brewer—a feat commonly known as SCA Gold Certification—something fewer than 30 coffee makers have attained as of this writing. The SCA certification is a great coffee-snob seal of approval, taking into consideration factors like brewing time and temperature, and even gets into incredibly helpful things like making sure the manual is well written. If you drink coffee from home brewers, the certification is as close as you can get to a guarantee of a good cuppa Joe.

Food writer Joe Ray (@joe_diner) is a Lowell Thomas Travel Journalist of the Year, a restaurant critic, and author of “Sea and Smoke” with chef Blaine Wetzel.

Those factors are among a small legion of other variables that include coffee quality and freshness, grind size, ground quantity and saturation, water quality and quantity, and brewing method, among others that can help make or break the finished cup. Being able to lock in a few of those with a good brewer like this one brings you that much closer to perfection.

I tested away, immediately appreciating the MultiServe’s removable reservoir, which helps keep the inner workings of the machine clean by discouraging the use of a potentially-not-100-percent-clean pot to fill the tank. Not that I would do such things. I also paid close attention to the Braun’s brewing time and temperature, and how that compared with the SCA requirements, and the results were on target.

While SCA testing is only for a combination of full pot, liter, and half-liter sizes (which of those they use depends on how large the carafe is) a Braun spokesperson said the company “maintains [the SCA gold] standards and parameters in all brewing sizes.” That turned out to be not completely accurate in my testing for smaller sizes, but not too far off. The SCA requires brew times between four and eight minutes and temperatures between 198 and 205 degrees Fahrenheit. (Technically, they say 92 to 96 degrees Celsius.) I found brew temps in the mid 190s and times 30 to 45 seconds below the four-minute minimum.

Still, not bad. I’d translate that out as great specs for larger brews and pretty good ones for smaller batches.

Using the timer (I know it’s old tech, but I loved syncing the start of the brew cycle with my alarm clock), I would make a full pot in the morning. In the afternoon, I’d make myself a single cup and ya know what? The smaller batches were pretty good. Better than similar amounts I’ve had in many other drip machines, and you can certainly tweak a few variables like grind size or the amount of grounds, or even try something like hitting the drip-stop lever to give the grounds some extra time in their hot water bath. You could even try the other brew modes (along with Gold, there’s also Light and Bold brew settings) and to see how it works. Plus, there’s no pod to throw in the trash.

One downside would be that this isn’t the kind of coffee maker that you leave out for guests to use on their own. Especially in the beginning, you’ll need to pay more attention than you would with a classic one-button Mr. Coffee. I also realized that setting a tiny cup in there, but leaving the dial on the travel mug sizes could leave you with a counter full of coffee. Another peculiarity is the two-sided measuring scoop the MultiServe comes with where one scoop is large and one small. The suggested amount of grounds for a 5-ounce cup is one big scoop, an 8-ounce cup is two small scoops, a 16-ouncer is four small scoops, but 20 ounces is four big scoops. It makes sense, more or less, but it would be much less confusing if they just stuck a cheap digital scale in the box.

The tradeoff for needing to study its idiosyncrasies is that the Braun rewards you for tinkering your way to coffee just the way you like it. If you’re down with that extra bit of effort and like brewing both big and small amounts the MultiServe a fantastic machine. Is it a K-Cup killer? Not a perfect one, but we’re a big step closer.

The Braun MultiServe Coffee Machine is available directly from the company, from Target, or from Amazon.