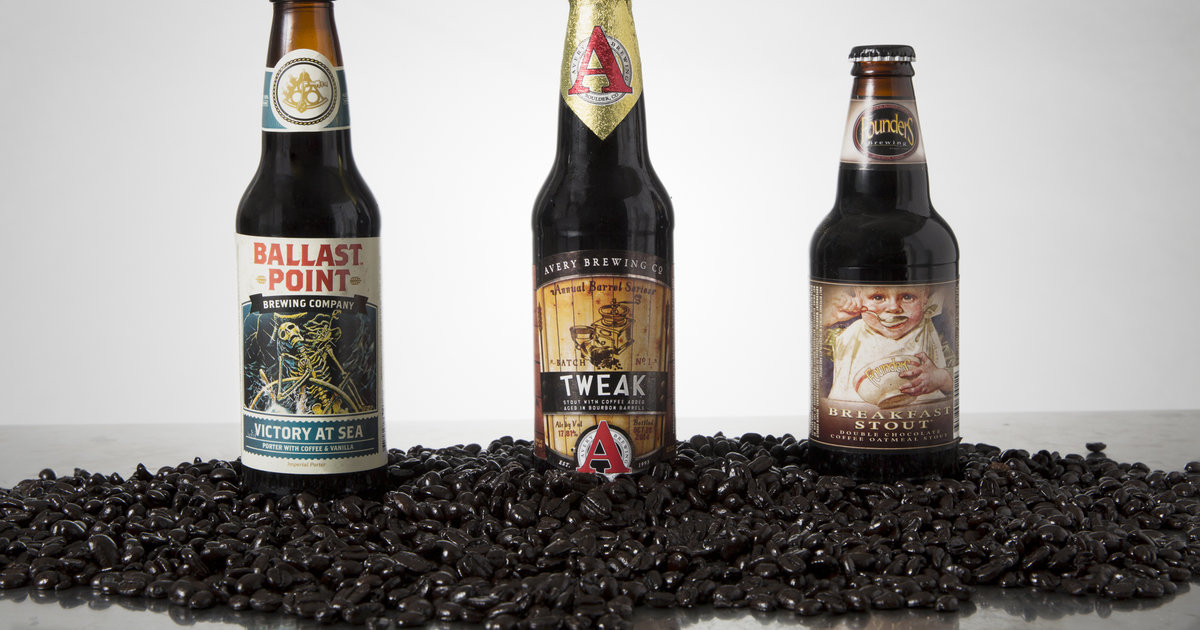 Coffee is a stimulant. Beer is a depressant. But put them together, and you get MAGIC! Or coffee beer or whatever. Anyway, on my months-long quest to find the best coffee beers in the country, I consulted beer experts, scoured the Internet, and watched A League of Their Own several times on cable before finally putting together this extensive list. During tasting, I judged the beers on four factors: coffee flavors, originality, overall taste, and if I would drink it again. Here’s what I found.

I only tested bottled or canned beers that are currently available, or were released in the last few months. So if you had the best coffee beer that was never bottled at a brewery that burnt down 20 years ago, I’m sorry that I couldn’t include it. Same goes for summer seasonals with coffee in them — I tested these in the past few weeks, so if it didn’t hit shelves recently, it won’t be on this list. 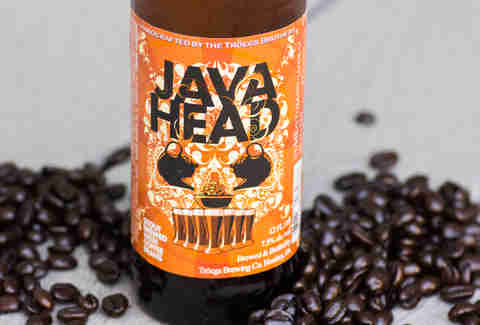 I have a fondness for things from Pennsylvania (Tastykake, the Philadelphia Eagles, liberty), since I spent a good bit of my upbringing there. But this doesn’t do much on the coffee or the beer front for me. But it’s brewed in PA, so I give it plenty of imaginary nostalgia points.

I feel like every time I have a Flying Dog beer, I know I’m in for an extremely heavy-bodied stout. This pours out as black as an Uber SUV I can’t afford to take, and doesn’t have the coffee flavors I need to truly love a coffee stout.

I’d probably like this more if it were a stout. But it’s a brown ale. Something about the milk sugars here make me want this to be something it’s not — it’s probably because I’m a diehard Left Hand Milk Stout drinker. Bonus points for using Just Coffee Coop, every listener of WTF’s favorite sponsor. 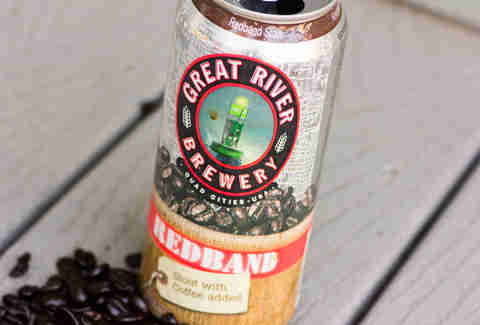 If you have a friend who doesn’t like stouts or coffee, they might love this! And that’s not a knock on the beer. But it’s one of the least stout-y and coffee-y beers I tried. The coffee notes are dialed back and the stout has a thin body. As the guy in charge of this taste-test, however, that’s not going to score you many points.

If you love cappuccino, this is your beer. Cannot stress how strong those cappuccino notes are when you drink it, which is surprising since there’s not much on the nose.

Wow, this thing delivers on its promise of milk sugar. Loving it. The one downside is the label featuring a creepy bust of a human head made out of coffee. It looks like something from the set of a horror movie set in a hipster coffee shop.

This is barely a coffee beer. There are notes of coffee, but it’s got as much to do with coffee as Chipotle has to do with an actual chipotle pepper. That’s not to say it’s not good — the sweetness from the maple syrup and the smokiness from the bacon all shine here. If you love experimental beers, you’ve gotta get your hands on this. 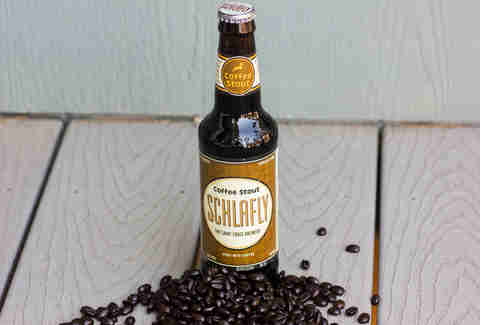 If you’re cool with weirdly sniffing things, get a whiff of this beer before you drink it. One of the best-smelling beers I had in this entire taste-test. And the taste delivers too — it’s smooth going down, and has a pleasing coffee aftertaste.

18. Tyranena The Devil Made Me Do It!

This beer goes to 11 on the coffee scale. If I lived in Wisconsin, I’d start every breakfast with a bottle of this and some cheese curds. And then go back to sleep.

Full disclosure: I live in Colorado and am a Yeti fanboy. I drink every single beautiful stout they release. In fact, the other night I had a Belgian-style Yeti, which is hard to find unless you time travel back to 2011. So this is a great Yeti, but it’s not my favorite attempt. I feel like a teacher who gives the smartest kid in class a B+ on a term paper just because I know that kid can do better. 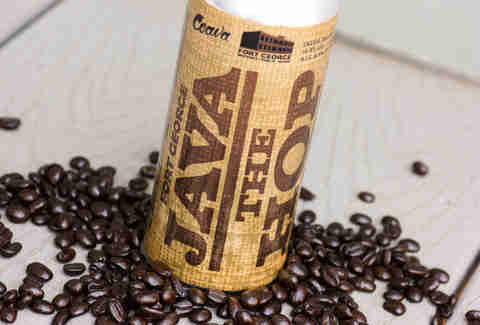 If I could give this a million points for originality, I would, as this is a canned, coffee-forward IPA with a great name that George Lucas is probably in the process of suing them for.

Oh hell yes. Don’t let a can the size of a soda fool you (they might wanna throw this thing into a tallboy), you’re gonna get a creamy, delicious stout when you pop open this bad boy. Great coffee flavors overall and a little oatmeal on the backend. Oatmeal just like Momma never made.

This came in one of the nicest-looking large-format bottles I’ve seen. It’s an AleSmith stalwart that’s been around for years. And it’s certainly a beer people look to as one of the best in class. And for me, this is a beer I’d drink after dinner instead of a cup of coffee.

The can says that the beer is “not for use with donuts,” but then why the hell did they make it taste so good I want to have it next to my bed when I wake up? Riddle me that, Santa Fe Brewing Company! 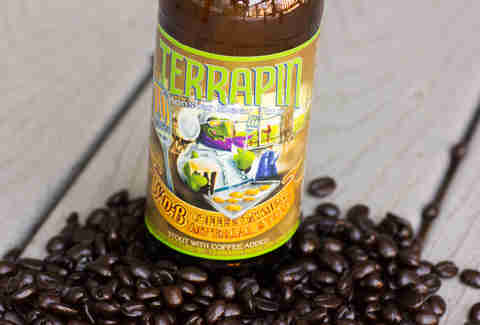 Coffee notes? Check. Oatmeal notes? Check. A drawing on the bottle of a turtle wearing sunglasses while carrying a tray of cookies and a beer? Aaron Rodgers-style double check.

You might say I’m biased because I live close to the brewery, and you’d be right. But the World Beer Cup judges aren’t biased, and they gave this a Gold in the Coffee Beer category. It’s easy to see why. Sippable as hell and full of coffee flavor. One bomber isn’t gonna be enough.

Like the best iced Irish coffee you’ve ever had in your life, owing to the fact that it’s aged in whiskey barrels. Epic, Big, and Bad are all quite fitting descriptors of this sucker.

A good number of these big coffee beers (this one is 8.3%) are undoubtedly delicious, but it’s hard to imagine drinking more than a bomber’s worth. Or even a bottle. Founders crammed a big beer into a regular-sized bottle, with a ton of chocolate, coffee, and oat flavors, and made it something you want to keep drinking all Monday morning long. Err, after work on Monday.

This is part of Stone’s Stochasticity Project, which has something to do with whatever Stochasticity means. Anyways, this is a stout, but it looks like an ale. And it tastes just like a stout! Great coffee flavors too. I bet Stone thinks they can put out any beer and it’ll be good, those Arrogant Bastards. Umm, this one is.

If you didn’t know this was beer, you’d think you were drinking a carbonated iced coffee. Surly claims to have used a cold extraction process that gives this a strong coffee flavor, and they are not kidding. Smooth, delicious, and it comes in pint-sized cans. Solid as hell. 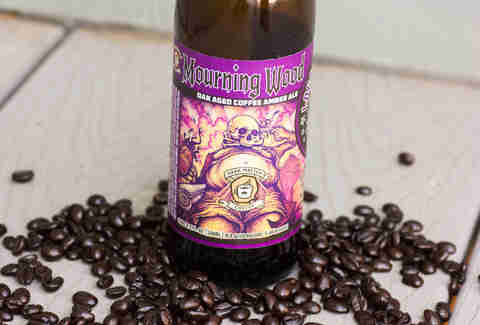 This is a coffee ale. You don’t see many of those on this ranking. There’s also a surprising amount of hops in this. On originality alone, this rockets to the top. The coffee flavors are strong enough to please any coffee freak, and it goes down easy. And there are skeletons on the label, so it makes a perfect gift for your goth friend that has a birthday coming up.

Sure, there are great coffee notes due to the cold brew in here. But let’s talk about the lingering vanilla notes on the backend, which are second to none. It’s worth drinking just for the aftertaste.

Holy moly! That was the censored version of what went through my head when I took my first sip. It did not change for the second, third, or fourth sips. This is a grown-up coffee beer — plenty of bourbon notes are present from the four months it aged in a barrel. And brandy notes. Tobacco? Sure, why not. I can’t even keep track of the millions of flavors here. One bottle of Tweak is enough. Mostly because it’s 17%.

I tried this in my kitchen one night after a long day of work, and it instantly put a smile on my face. That’s the best endorsement I can give it. It also doesn’t taste like any other coffee beer I’ve had. And in a crowded field of coffee craft beers, that’s a big deal. I named their pumpkin beer, Good Gourd, the #1 pumpkin beer. This came in close at #2. Is it possible for a brewery to adopt a person? Because I’d like Cigar City to be my legal guardian. 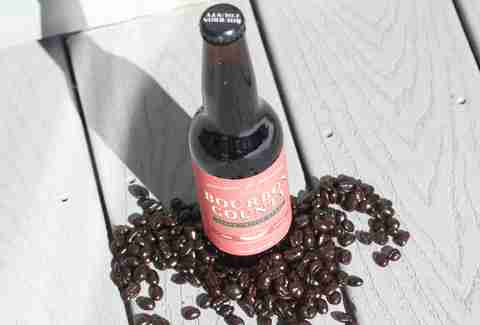 Intelligentsia started in Chicago and helped pioneer third-wave coffee shops. Goose Island helped pioneer the craft beer movement, also in Chicago. Together they’ve created one of the most flawless coffee beers, nay — one of the most flawless beers I’ve had, period. Imagine one of the best stouts you’ve ever had combined with one of the best cups of coffee you’ve ever had. That’s this beer. My only regret is that I didn’t find two bottles of it and age one for a few years before drinking it.

Most brewmasters know that by adding coffee beans to a stout, you have a good chance at making a satisfying beer. But not all coffee beers are created equal. The brews that truly transcend the stout + coffee formula are aged in bourbon barrels, use superior ingredients, or use newfangled techniques like cold extraction to stand out from the pack. Ultimately, for any serious beer drinker, those are the beers you need to get your hands on. They’re the ones that remind you why you drink craft beer in the first place.

Lee Breslouer writes about food and drink for Thrillist, and needs a break from stouts for a second. Follow him to IPAs: @LeeBreslouer.